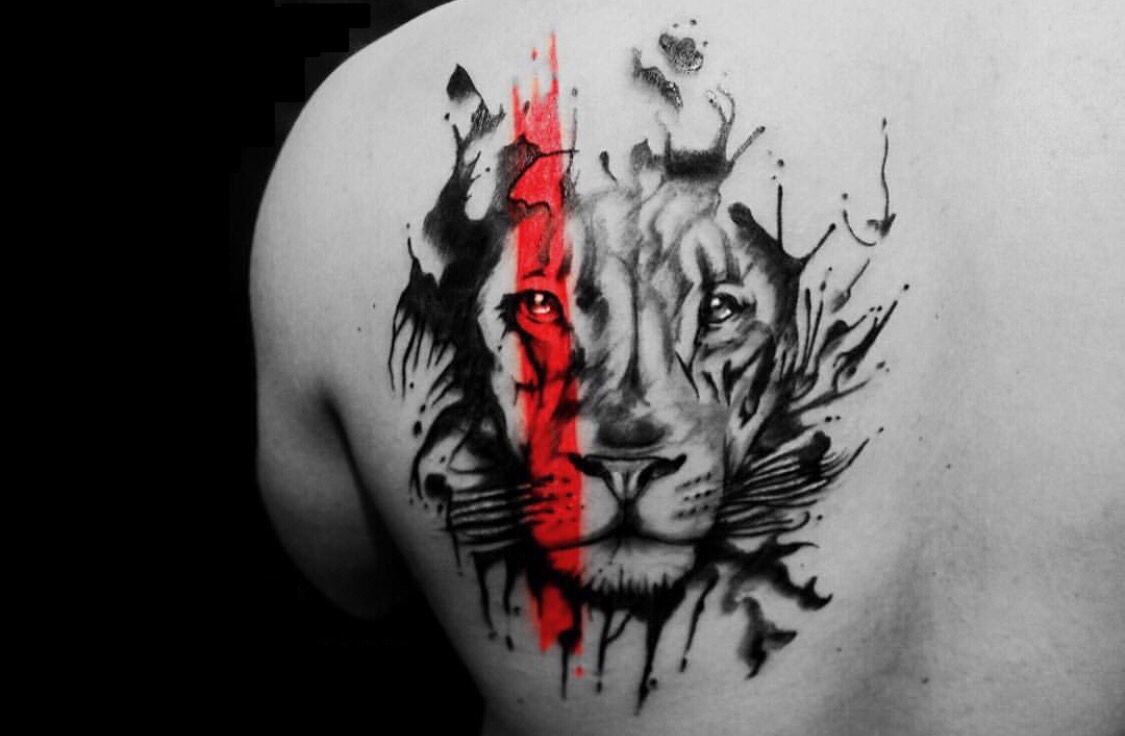 Trash polka is a fairly new tattooing style that originated in Germany that uses a characteristic black and red ink and chaotic collage styled pieces. They are full of splatters and smudges surrounding the design making it looks like a warzone. It uses overlaid words and phrases and generally seeks to confuse the viewers without actually being clear as to what the tattoo is about. Often trickery and visual illusions are used. It has a characteristic element of realism though that employs a lot of juxtaposing to make a stunning awe inspiring and confusingly beautiful tattoo.

Where did Trash Polka Tattoos come from?

This style is a painterly dynamic tattooing style developed by Simone and Volko Merschy for the Buena Vista tattoo club of Germany. The dual became famous for their crazy combination of realism and surrealism script and abstract lines. They also mixed bold and fine black lines with grey shading and dramatic splatters of red. As aforementioned, the tattoo does not make sense easily and seems like a collage of completely unrelated elements.

You will love the bold style of the tattoos that gives them the “just finished” look with black and red ink. These tattoos can be done properly, age surprisingly well considering the impressive contrast and visual appeal. With this style you have to be sure because the canvas required for all the chaos is relatively large.

The beauty in getting a Trash Polka tattoo is that you can only get it from the artist who made it. Anything else would be a failed attempt at forgery. You will have a harder time finding an artist who is willing to go with custom images because the original maestros only work with their own chosen images.

Check out our top ten Trash Polka tattoos. In here you will find incredibly detailed and genuine works of art. As a heads up, some of the images you are about to see are a bit gruesome.

A compass is essential to navigate and perhaps this here is a broken moral compass. Without it the wearer of this tattoo is suffering and may wander off getting lost forever. Marks in red seem to be blood and injuries caused by the sharp parts of the now shuttered compass instrument. It is difficult to make complete sense out of a trash polka tattoo when it is not you own creation. These are just suggestions as the true meaning is known by the designer or perhaps the wearer of such tattoos. 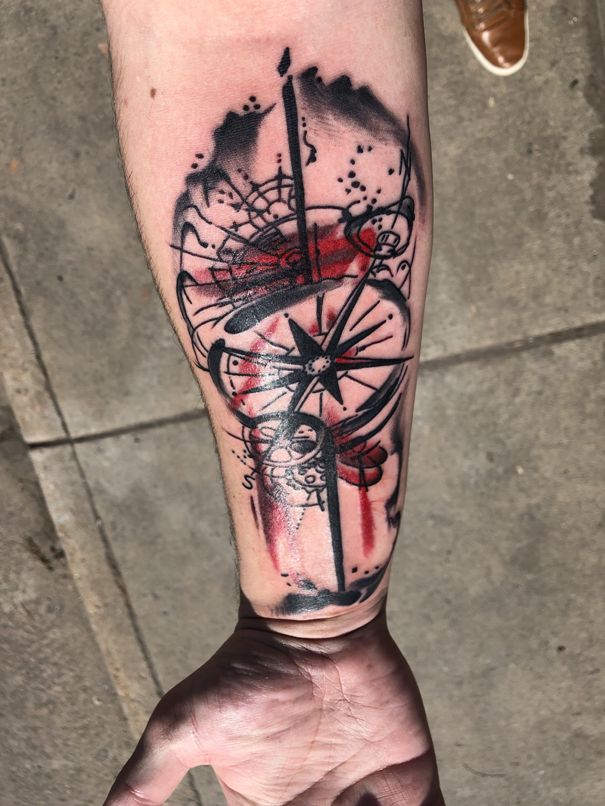 This is a horror inspired gory tattoo showing a screaming man in the instant where they blow their own head off with nothing but their fingers as the gun. One half of the man in the image is painted in red ochre and the other is black. There is a ghoulish skull embedded in the image and the red splash emerging from the other side of the head seems to be blood. This scary sleeve tattoo comes from a dark place but it is a undeniably remarkable work of art. 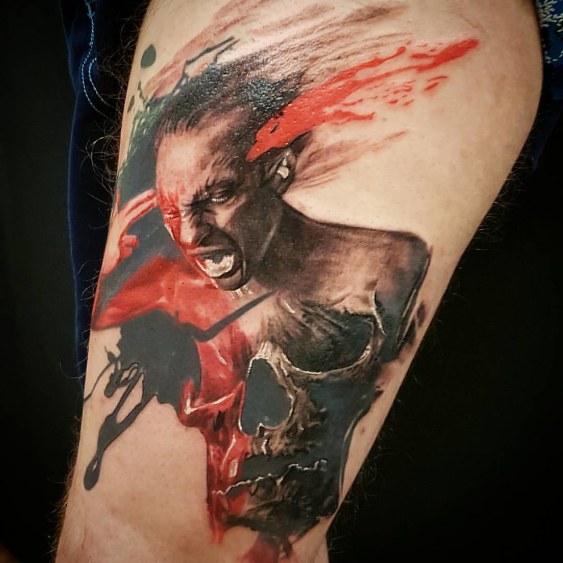 With what seems like printed text, this tattoo creates a horror scene straight from a movie arena with the weird face and red crosses. The black and red work is bound to send chills down the spine even before trying to read the text which makes no obvious sense. Different font and sized of the quoted text makes it difficult to read and even more difficult to comprehend. It is made to look like newspaper excerpts. 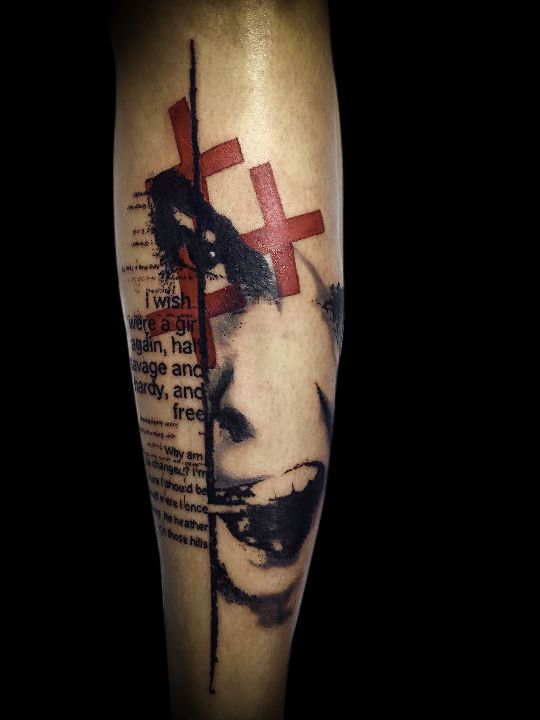 Now this next piece is a confusing scene with what appears to be the torn side of man revealing the portrait of yet another individual with mouth ajar. The express of awe and surprise is evident on the grey scale picture of the man. A sketchy crown over the image seems to suggest that the surprised man is of royalty. Yes these inks can get pretty complicated but that’s the whole point in getting one. 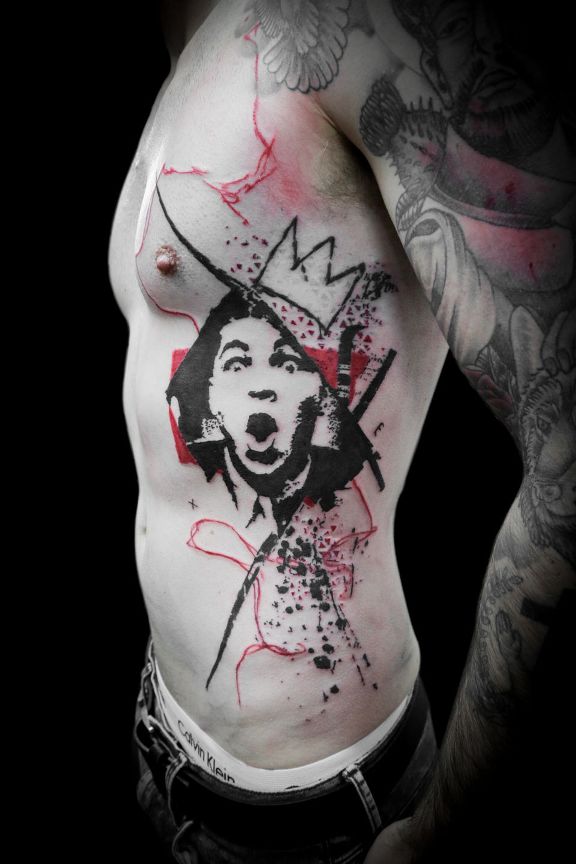 With the characteristic red and black palette, this artist paints an entire scene of an eagle’s flight gone badly with some barely related geometric patterns down below. They even included the impossible triangle known as the Penrose tribar or the impossible triangle. This is a clever illusion of a solid object which can be drawn and seems real on canvas but cannot exist in real life as a solid object. This chaotic tattoo is an ideal case of Trash Polka family tattoos. 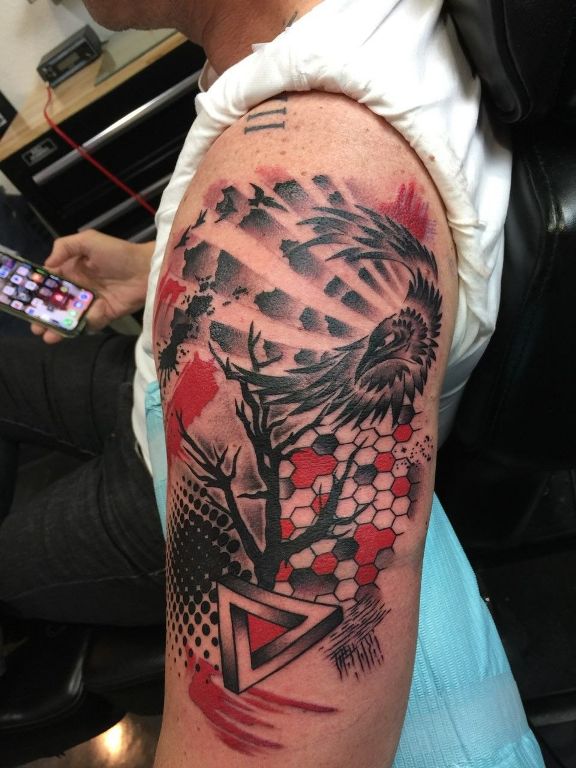 6. Assassins Creed Side Tattoo For Men

Inspired by the novel or movie Assassins’ creed, this tattoo rips his side open to revel a partial face of a man hiding in the dark. The reds interweave into some kind of netting pattern and that is a skull at the front end of the triangle clearly spelling death and danger. There is a rubber stamped text on the lower half of the tattoo which contains illegible text. 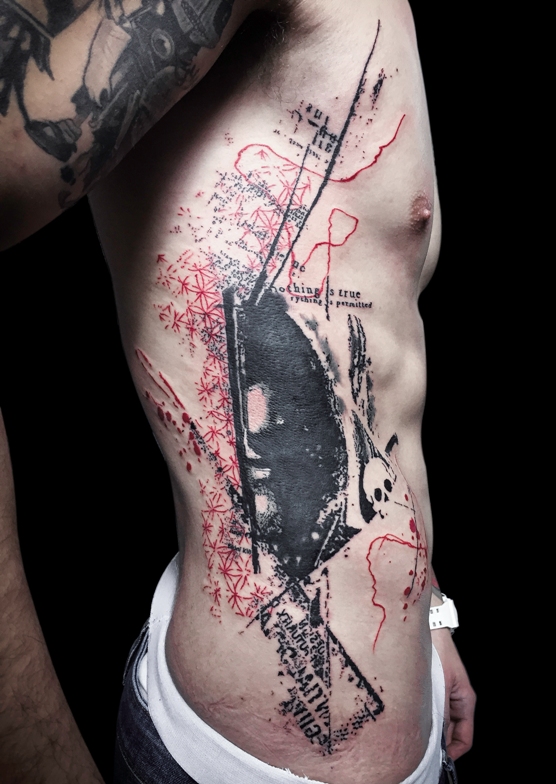 This is a black graffiti tattoo with a black mouth biting on the lower lip and the writings Essence of life in calligraphy. Less visible in red is some numerals and imitation of text. It looks like a mouth and date of birth. The whole image is chaotic and indiscernible at first glance. This has the attention grabbing effect that has people staring almost rudely. Fortunately, you can show this tattoo when you want or make it disappear under an ordinary shirt. 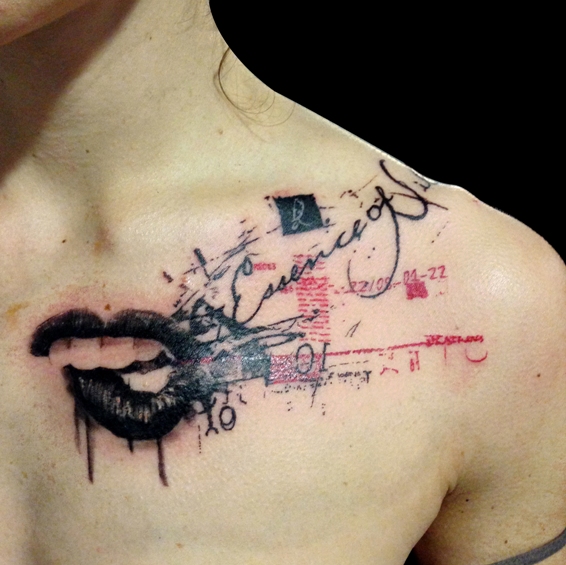 The Pisces symbol or Japanese koi fish swimming in opposite directions is a rare tattoo used to symbolize confusion and the struggle between the Logic and emotions in an individual. This particular tattoo combines a simple and classic style with deep meaning and therefore belongs well in this list. The fish tattoo is also a constant reminder that sheer determination will help you overcome the turmoil in your life. Be strong and determined and willing to face challenges and you will achieve success by overcoming the difficulties. 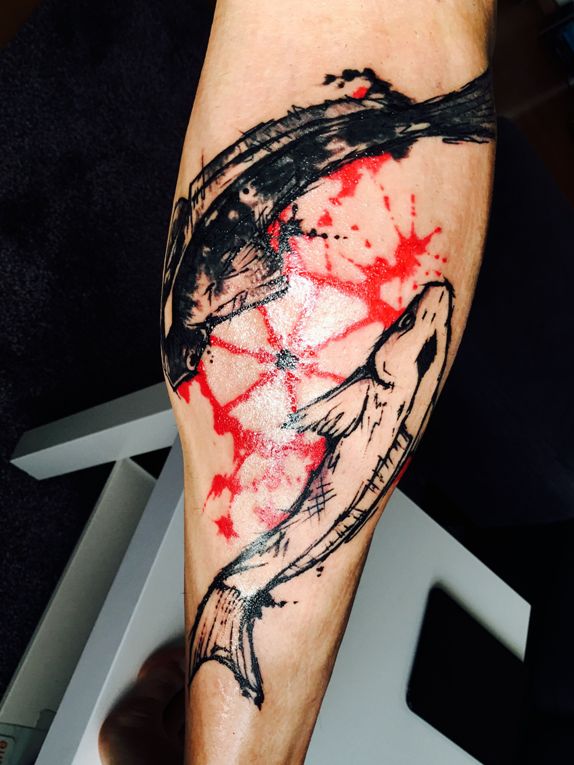 This war coyote is evidence of the birth and inspiration behind this family of tattoos. It hails from the Rhein and the struggles of soldiers under the Fhurer hence the violence and confusion. The tattoo shows a snarling animal with a gas mask and a grenade while a war craft hovers above. It seems that this coyote is furious and leaving a trial of death and destruction in its wake. Chemical weapons and explosives were a common phenomenon in the world wars. 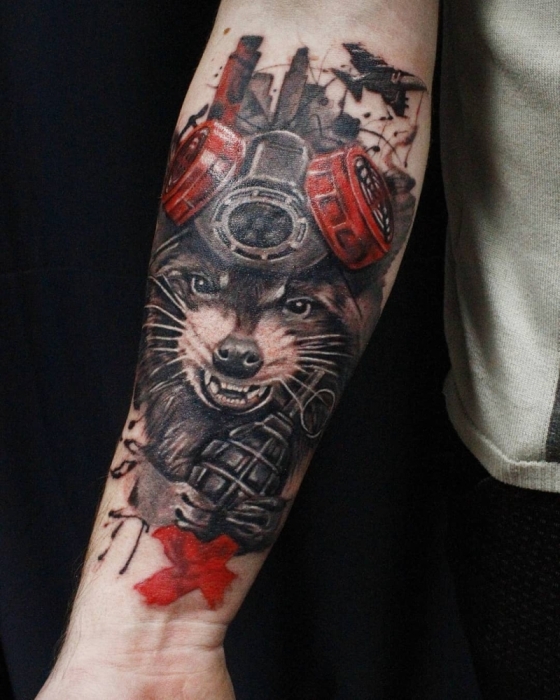 The owl is an animal whose presence is felt thank to its cold majestic stare. Some believe that this predatory bird can tell the future or communicate with the dead offering protection from evil. In other quarters, the owl is feared as bad omen and bringing death in the community. Regardless of the divergent views on the spiritual significance of the bird, the owl is majestic bird well deserving of this all black back tattoo. The dotting beneath the bird’s head are a curious addition. Of course it’s not a trash polka without the red streak. 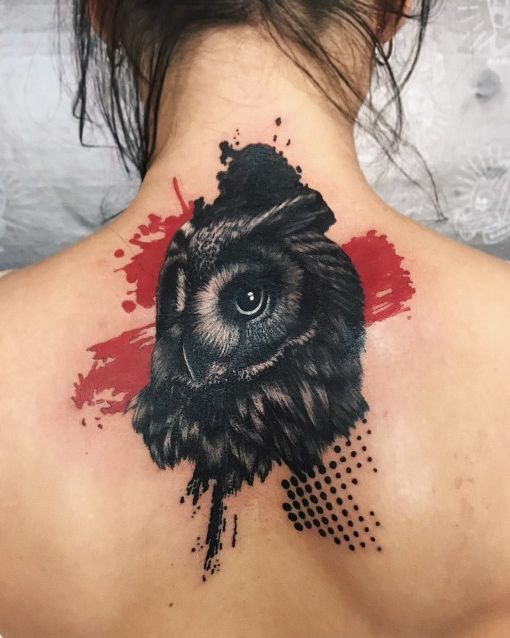 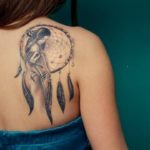 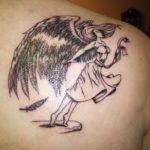 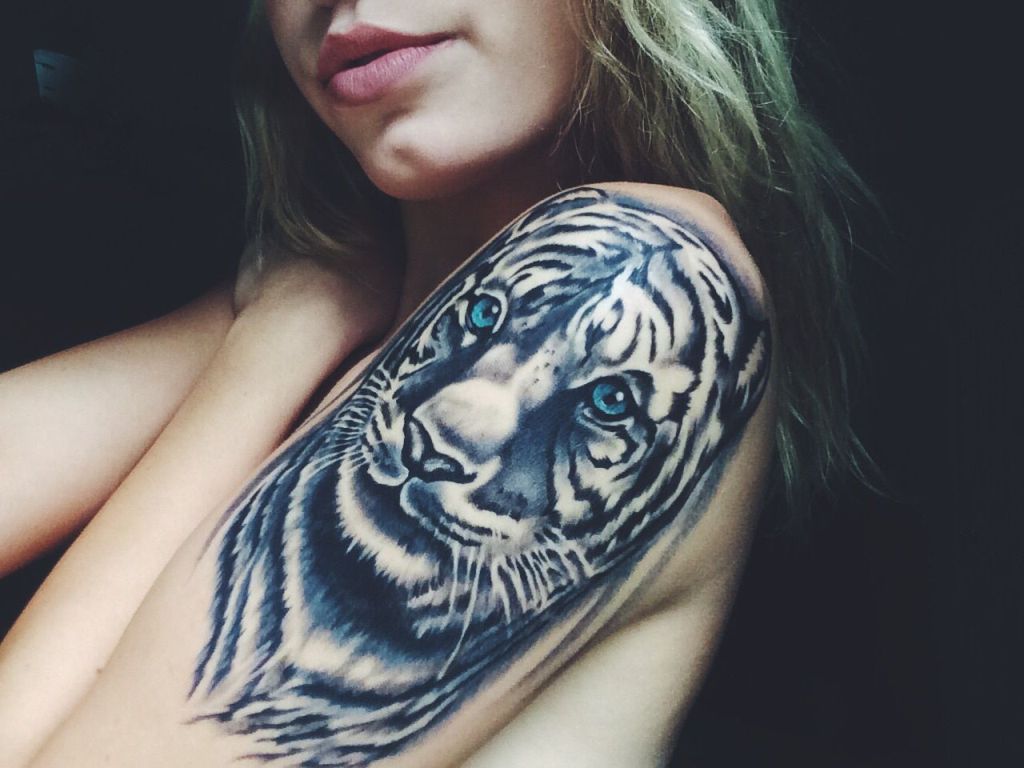 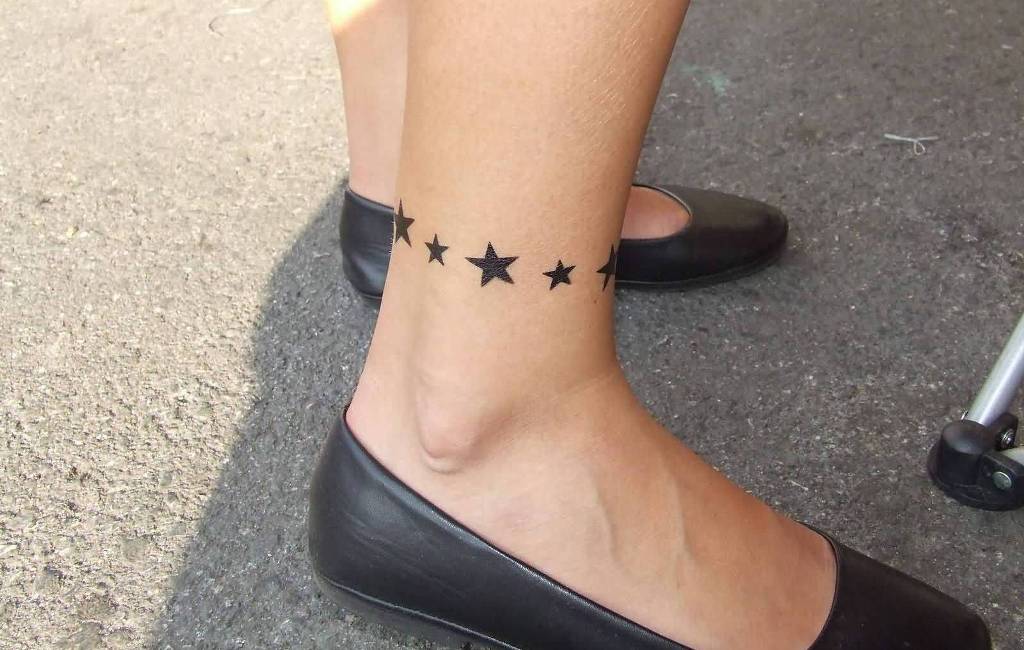 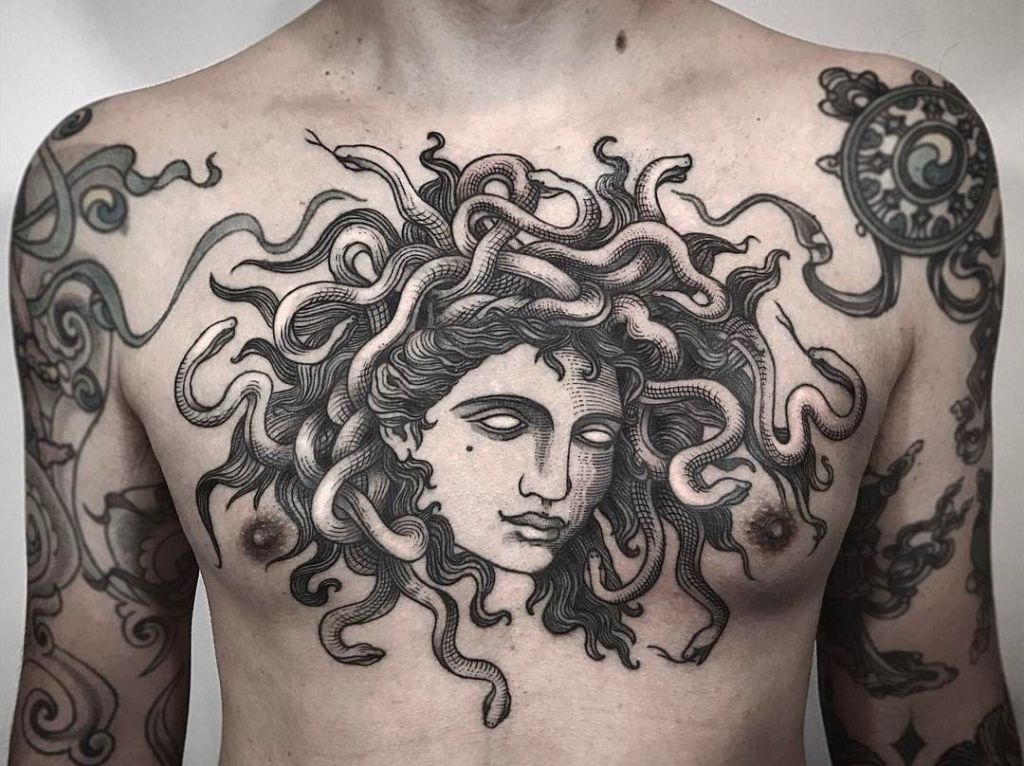