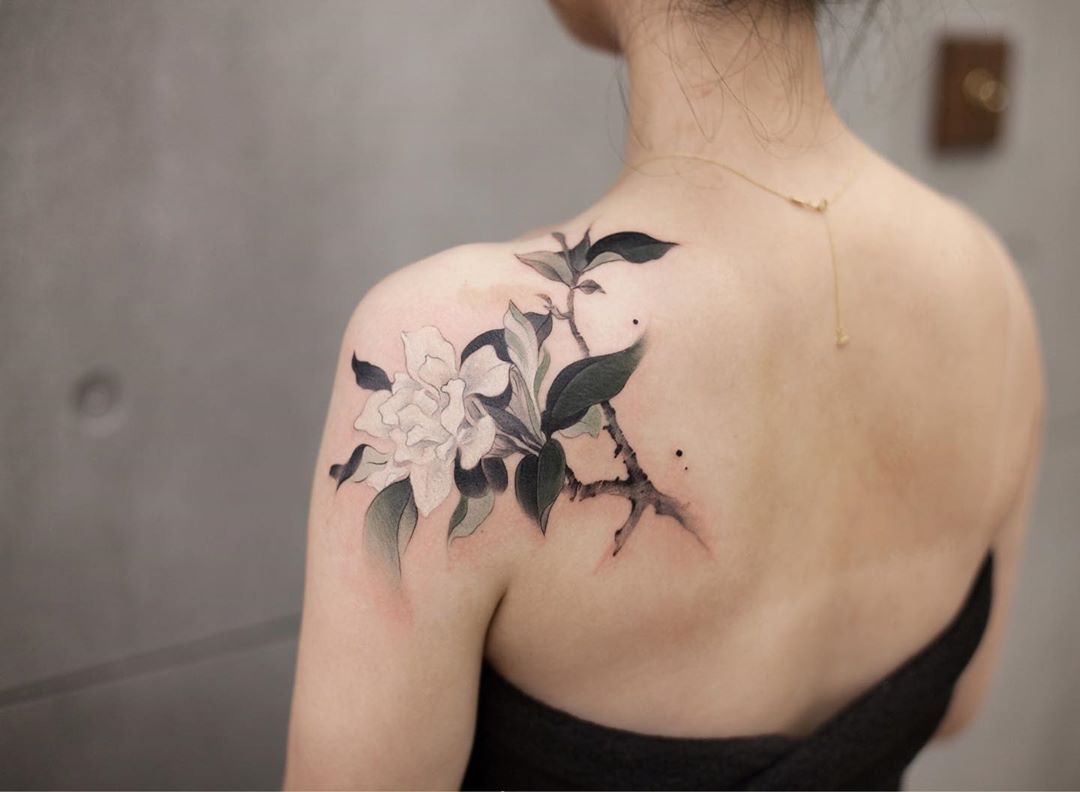 When we touch on Japanese tattoos we have to recognize that it is perhaps the most famous oriental tattoo cultures the world. In Japanese the tattoo culture is called as Irezumi and has roots from back in 10000 BCX. Over the millennia, the place of tattoos in the oriental nation has been varying and most recently on the downturn due to adoption of tattoo styles by gangs and organized criminal cells. Unfortunately the most gifted artist has gone underground tattooing for the black-market thanks to the pressure from the government.

Getting some tattoos will require huge risks as, they are not mainstream and people who specialize in them have to be secretive about it. Fortunately there is a large array of tattoos to select from without having to interact with dangerous gang members. There are tattoo artists based in western cities like New York and LA who can deliver the same awe inspiring and emotionally charged ink for less hassle.

Flowers and dragons are some of the most famous elements of Japanese ink culture. Flowers can stand in for so many themes ranging from good fortune and happiness to the sad acceptance of loss through death. Dragons too are mythical creatures which can take on the form and characteristics of their environment and can be good or evil.

Now you are able to appreciate how solid the tradition of motivational and spiritual ink has been for the Japanese. You might want to check out these inspirations mythical, floral and other forms of artistic expression that you can use to look glam. The imagery ranges from abstract and somewhat strange monsters to vivid true to life floral designs. This style will be easy to spot in the future once you take a look at our full spectrum of the different kinds. Enjoy! 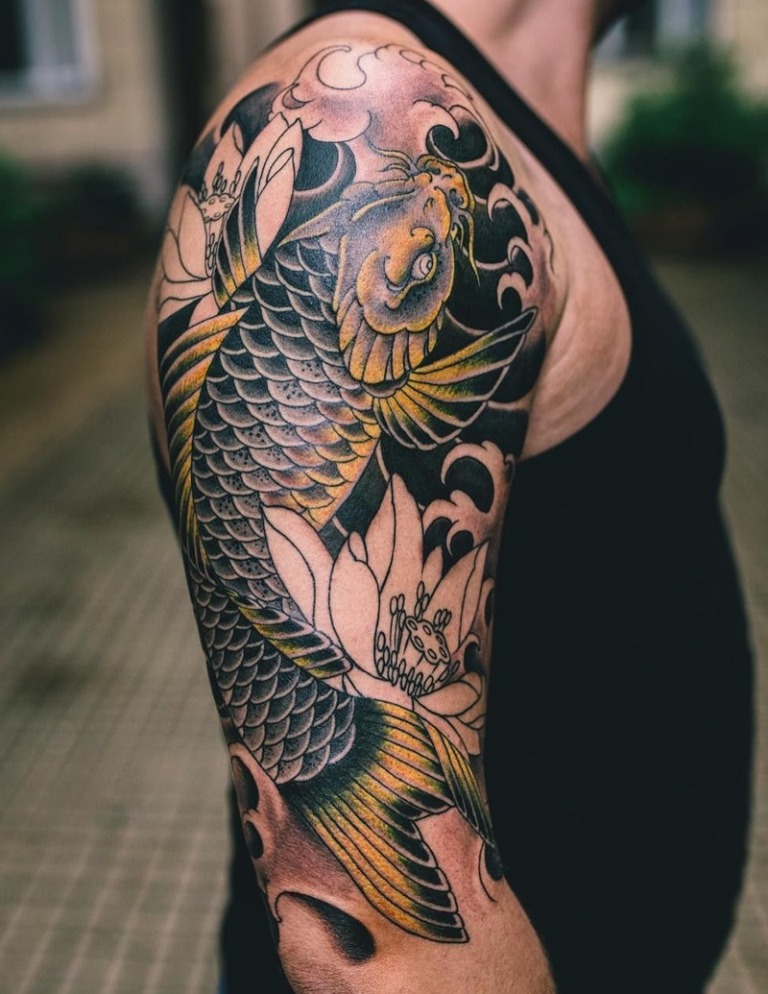 We kick off with one of the most popular Japanese totem ideas, the Koi fish. The fish is known to possess strength, prosperity and determination. It is also a symbol of independence and good fortunes. The fish itself is small and humble, but the Japanese people revere the creature because of its perseverance and determination in the face of adversity. It is also one of the most romantic and intricately patterned colorful tattoos you can choose from Japanese cultures. 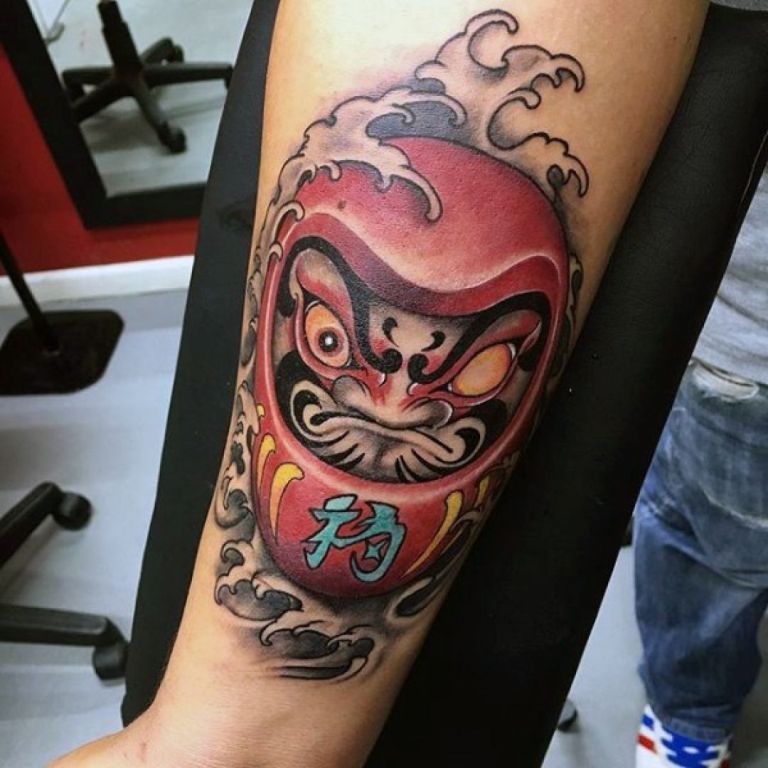 A Daruma doll is a sacred object in Buddhism that comprises of a hollow rounded doll that is made to look like one Bodhidharma the founder of the Zen tradition of Buddhism. The dolls may vary in color and other details due to artist and from region to region but they always depict the likeness of a bearded man, Bodhidharma. The dolls are seen as a symbol of perseverance and good fortune. They are therefore giving out as gifts for encouragement and best wishes. It is all the more reason to get the doll inked as a good luck charm and to bring success. The one eye suggests that a breakthrough is yet imminent. 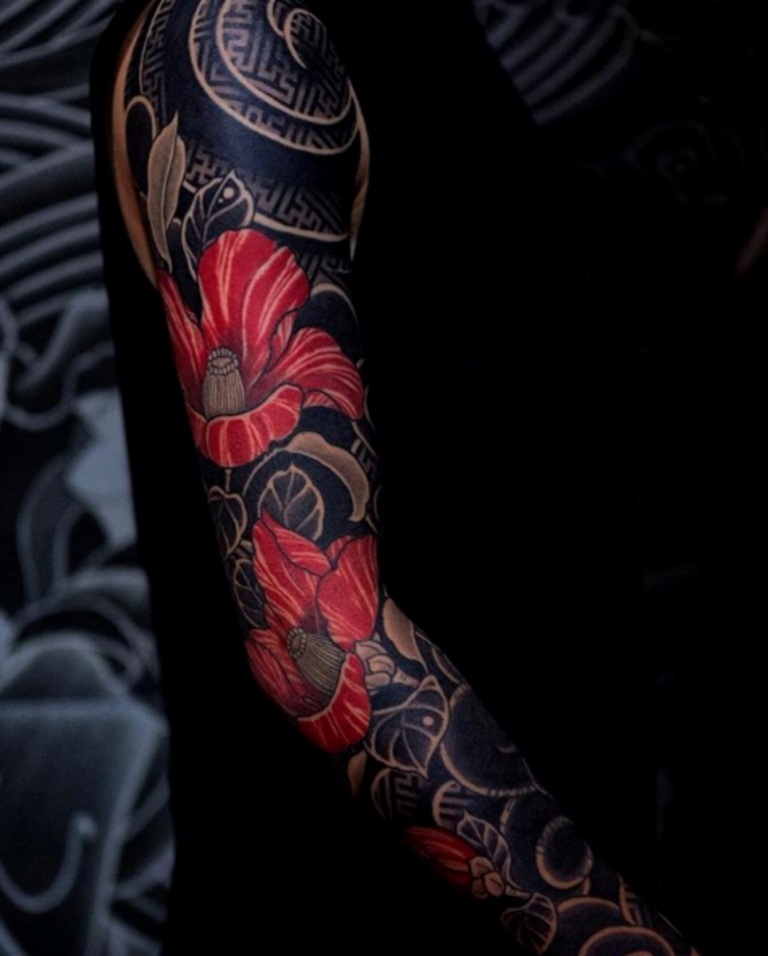 Another aspect to love about Japanese traditional tattooing is the use of floral designs. Lotus and peonies are some of the motivational flowers adapted for these sleeve designs. Artists vary the flowers from abstract pieces to true to life designs. When you are after intense body modifications then Japanese is the right category to look for some horticulture and landscaping. Carnations, chrysanthemum and cherry blossoms are some of the most popular flowers used in this style to create some impressive artistic depth. 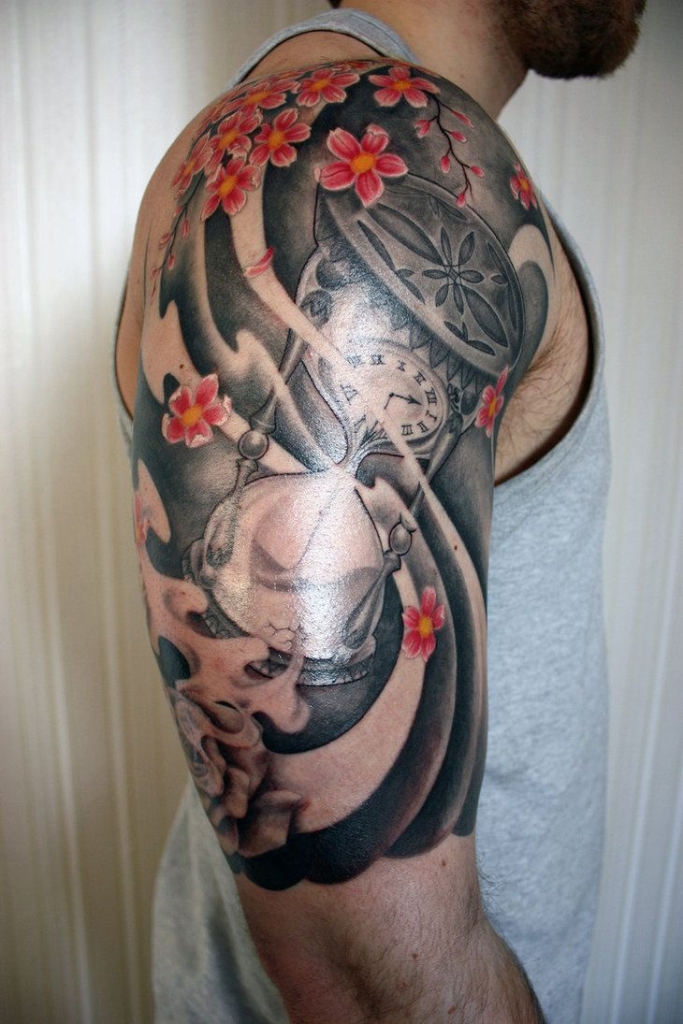 If you are looking for a universally meaningful tattoo with a touch of oriental Japanese ink the hourglass is the perfect hit. A clock and hour glass universally mean time and the passage it. This in turn alludes to the impermanence of life and the passage of the same. Our time here on earth is perhaps the most important thing we have and the most valuable commodity we own. The way we spend our hours is the difference between success and failure. 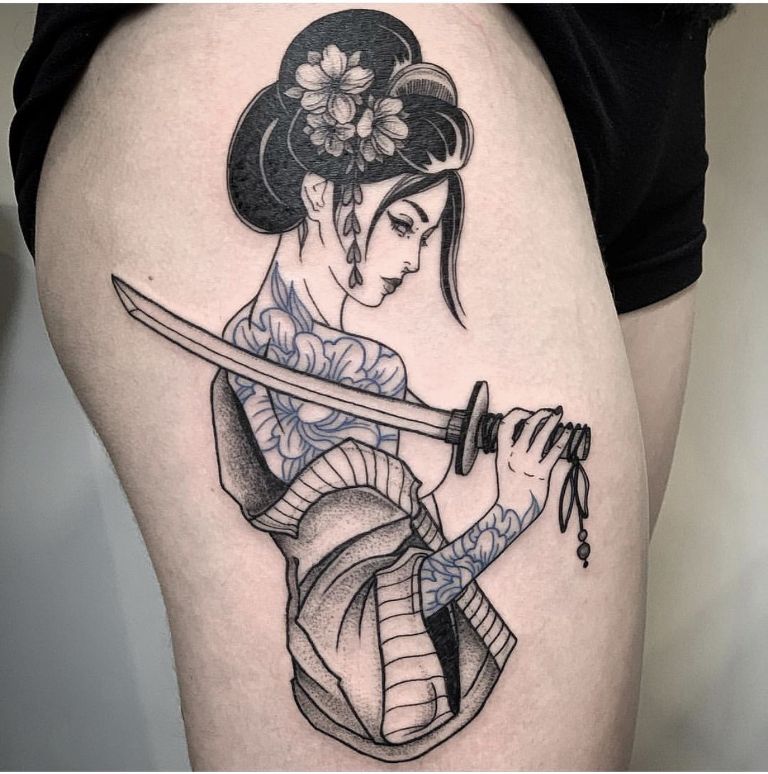 In Kyoto and other regions of japan there is an old tradition for women entertainers who are highly trained in music, art, dance and plays to entertain guest. The geishas are supposed to be refined, beautiful and confident in a way that makes then seem attractive and unattainable. The Geisha tattoo with sword therefore stands for intriguing feminine power and mystery. She is refined and hidden from society making her untouchable and unattainable. She is the living embodiment of aspirations, desire and ambitions. 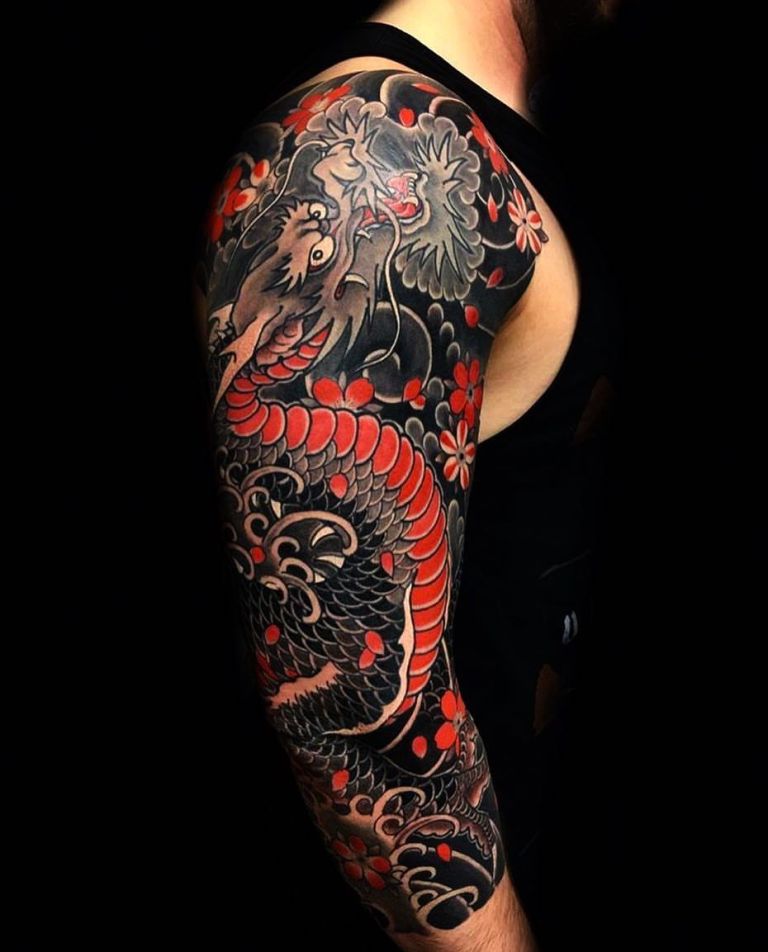 The Japanese dragon also known as Ryu is the most recognized creature in Japanese iconography and as far as tattoo go. The creatures are revered as a symbol of blessing, wisdom and profound strength. The dragon is able to manipulate the elements to the benefit of believers and the same should go for tattoo enthusiasts. Dragons are a popular totem because they can take on many characteristics of various creatures. The true nature of a dragon, whether good or bad, depends on the animals that it encounters along the way. 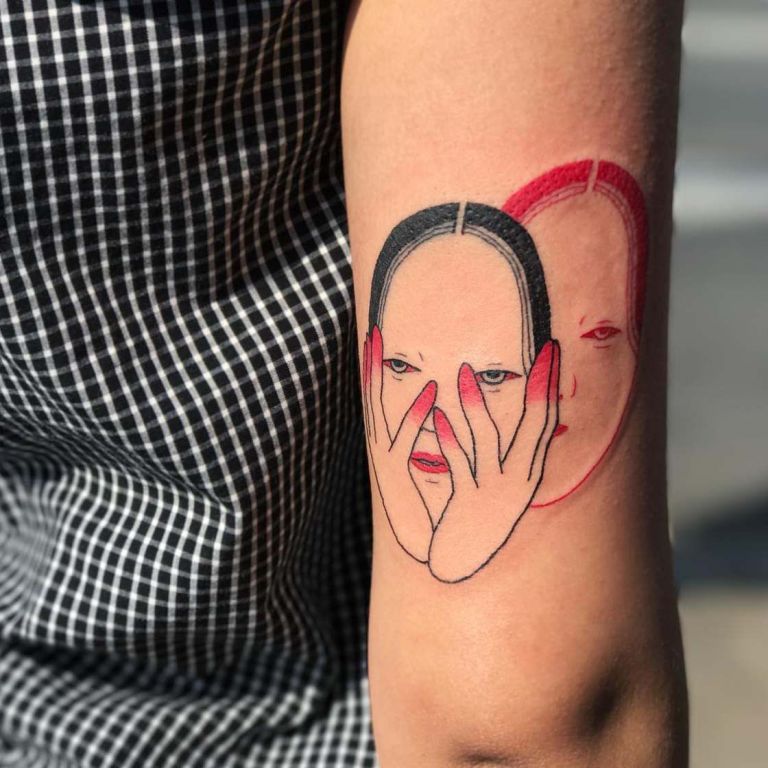 In truth, many Japanese tattoos are about good and evil and some are downright demonic. On the other hand this two layer mask tattoo is supposed to protect from the humanoid demon. The succubus demons are supposed to be seductive and enchantress so that they interfere with good health and mental wellness. Luckily, this charming ink will guard against their evil tricks. 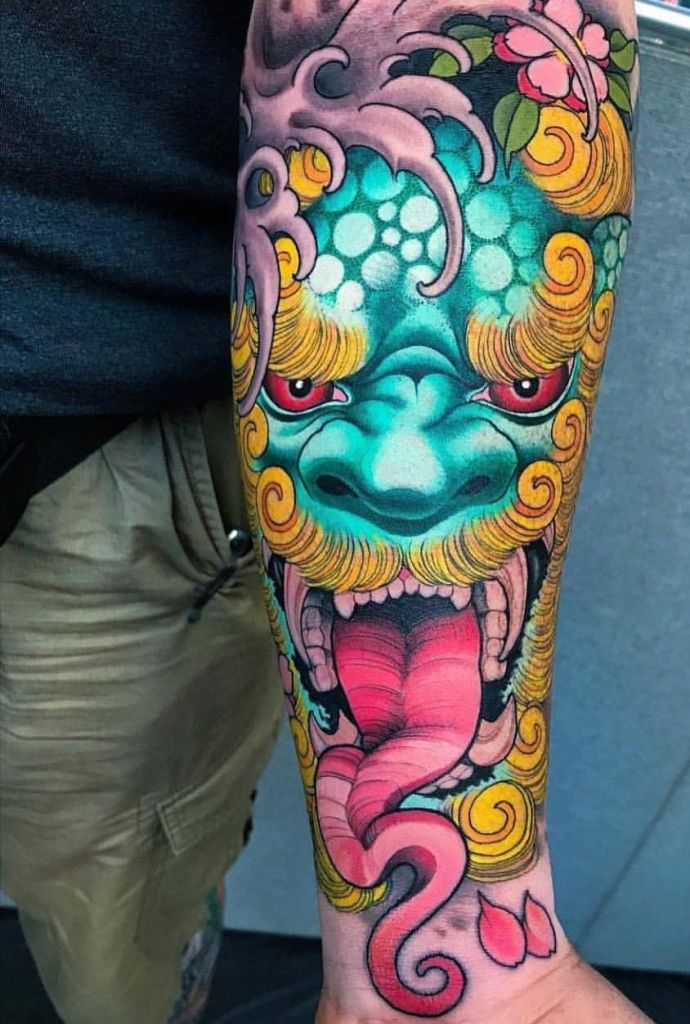 His mythological world of irezumi is one of the most interesting creative tattoo cultures around the world. Not notably is the use of those bright colors and illustration of gorgeous, terrifying and always mystifying creatures. This demon like creature is known as Fujin and is the Japanese deity of the wing. The deity has powers to alter air currents and his skin glows blue. People who dislike Fujin will love his rival brother Raijin who the god of lightning and thunder. 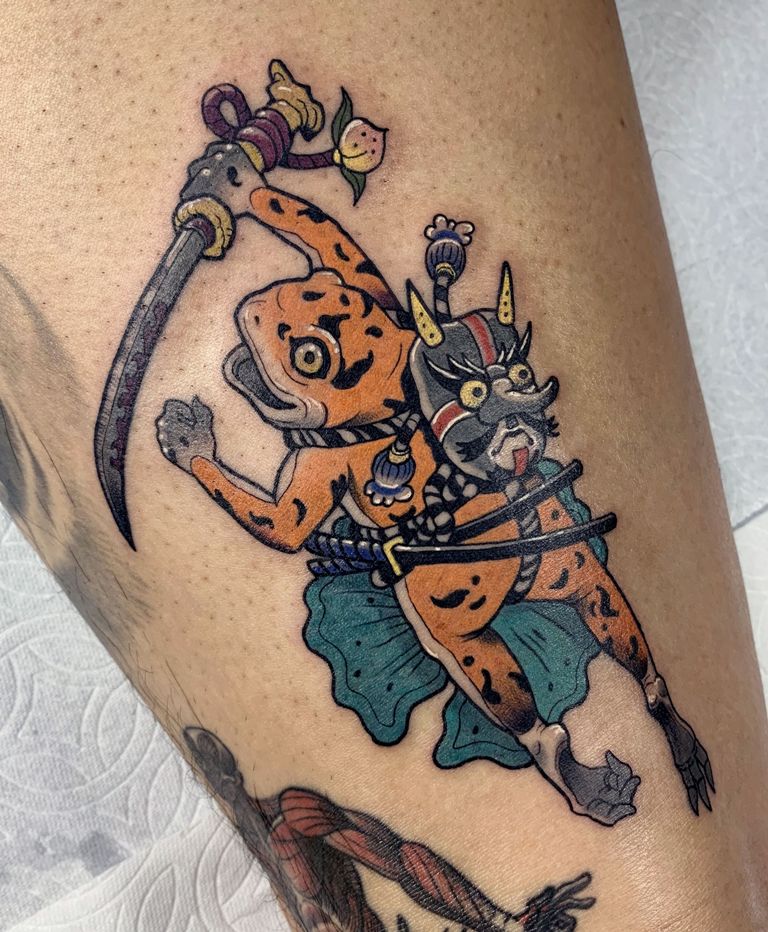 In traditional Japanese beliefs there are those who believed that the frog is the all-powerful god of rainfall and ensurer of good harvest. As such the toad with a sword was heralded as the holder of good fortune, prosperity and lifelong abundance. This makes a frog tattoo the perfect totem animal for people looking to have a bumper harvest. Regardless of your trade, it makes sense if you crave a warrior frog with magical powers to make your super rich. 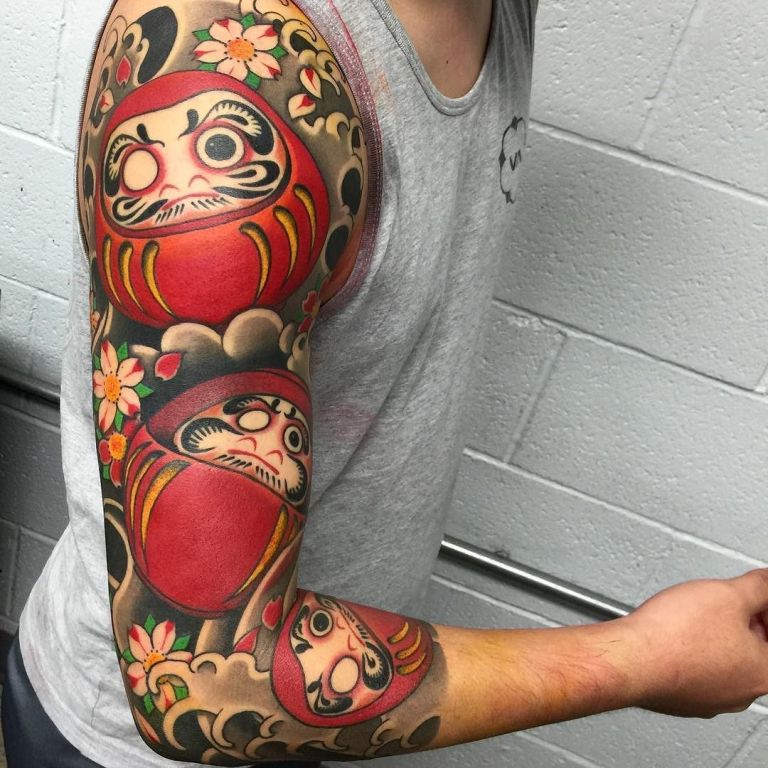 The daruma doll is an interesting object in real life and more so as a tattoo subject. Found tucked in many Japanese homes the red dolls with one eye stare down fiercely and with determination. Two or one of the eyes are intentionally left blank by the creators to allow the user to personally draw in the pupils and irises. The process entails having a dream or goal, purchasing a Darum doll and painting in one eye and then later painting in the second eye if and only if the goal was achieved. Clearly, this person is still working on their dream. 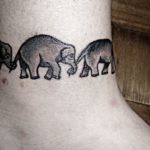 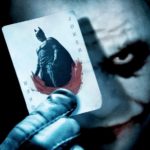 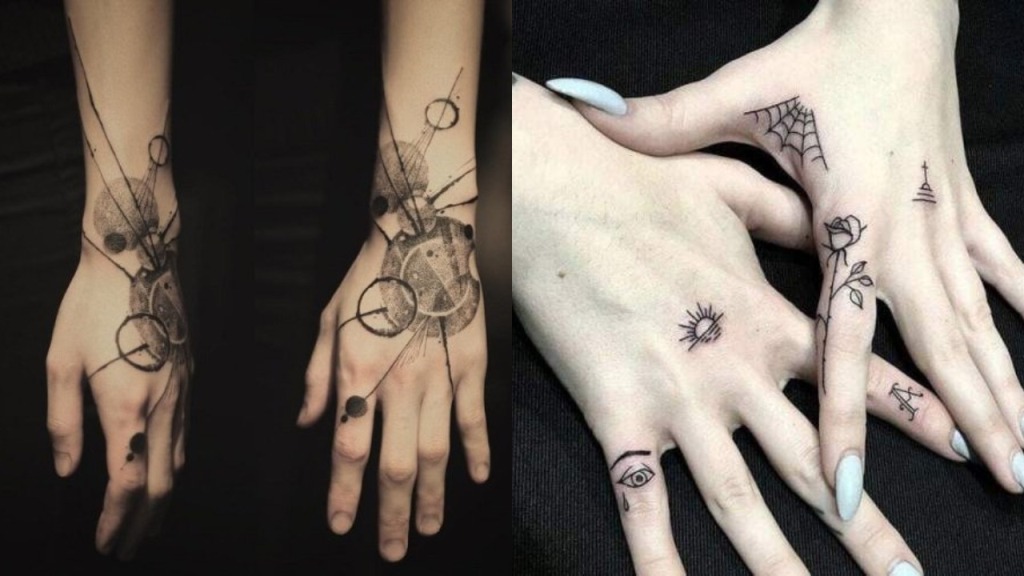 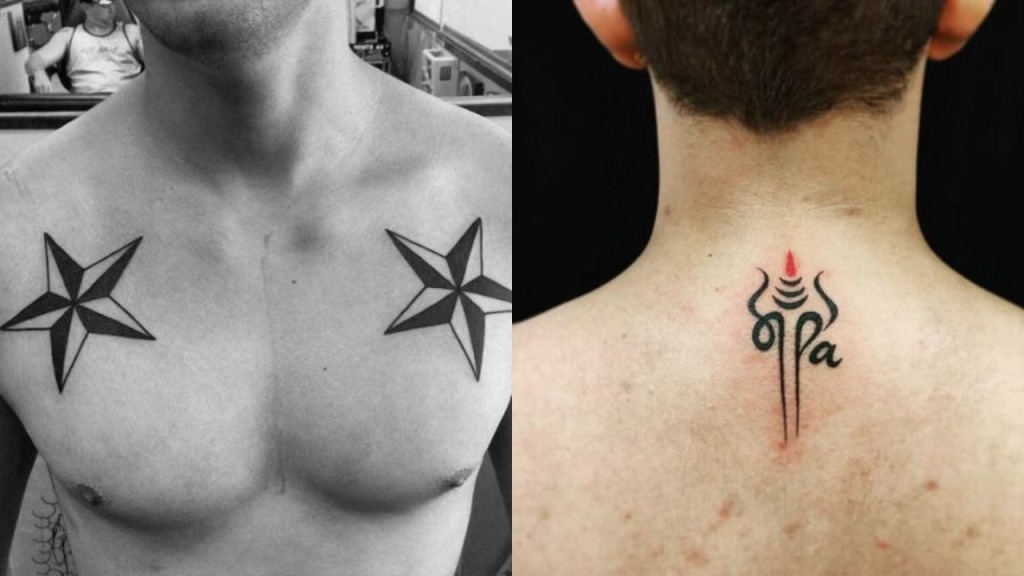 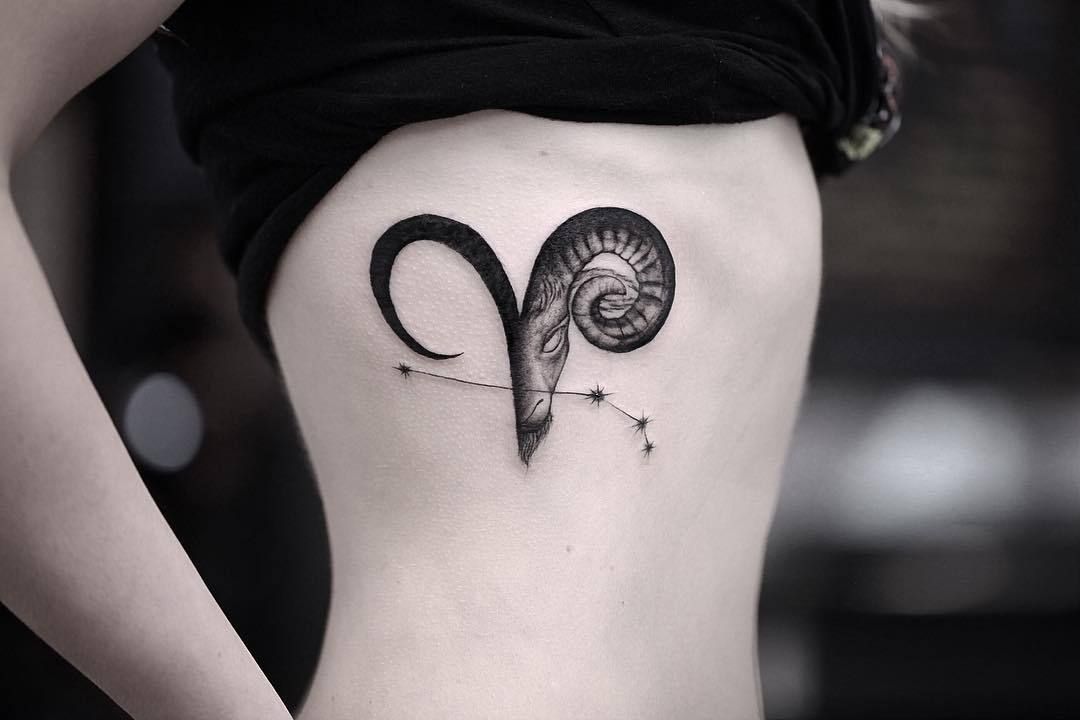