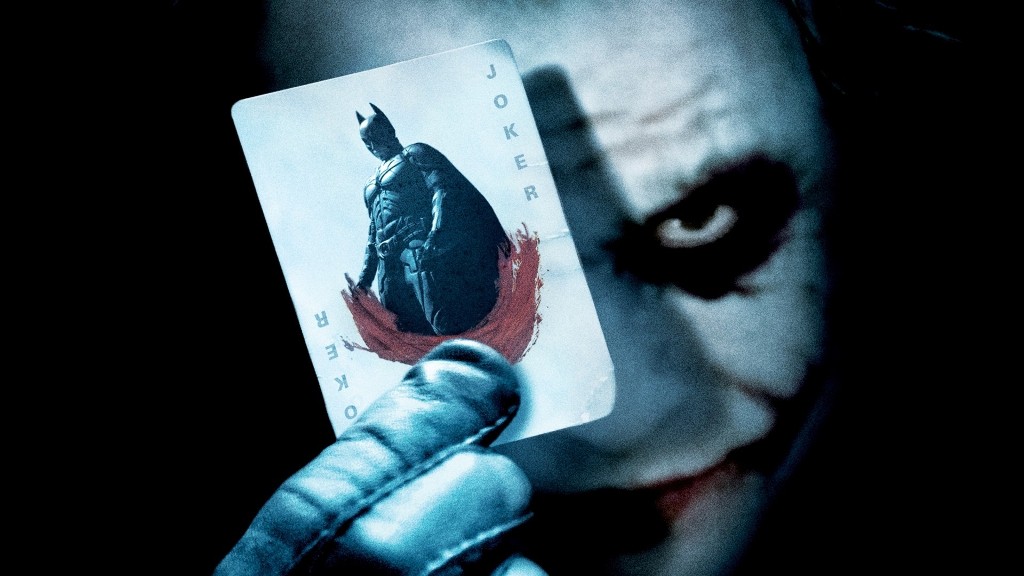 The joker character is perhaps the most iconic villain in the world of comic films and it is no wonder that the image is carried on by the tattoo art world. Some joker tattoos are quite provocative and bring on that Halloween mood instantly. But further than just the villain lifestyle, there are perhaps slight positive aspects of joker tattoo you didn’t even consider before. There are also actual people behind the character who have played the role on screen and their fans tend to prefer joker tattoos. One of them is Heath Ledger even though the Mark Hamill’s interpretation of the animated DC universe is also one of the well-known instances of joker.

Joker is almost synonymous with that painted clown like face especially in the tattoo world. People who feel like having this tattoo tend to go for the more creative pieces that also include a message or combination with other message tattoos. For the most part the joker image creates a rebellious nature and sinister thoughts and actions. We all know better than to trust someone with that sinister look. He is the symbol for anarchy and chaos in all its forms. But you don’t have to be an outright anarchist to enjoy a joker tattoo.

On the plus side, the joker character is a liberal and cannot be controlled by anyone. Many people want to make their own rules and serve their interest. It therefore makes sense why one would want to get this iconic tattoo. Thanks to the hype around the series of film, a culture of crazed fans have erupted making a joker tattoo the next cool tattoo. The deeper cult praised Joker as heroes of some sort like say Avengers or batman.

Placement for joker tattoo is a hot subject of debate. Most people have them on the arms as full and half sleeves. Arm placements are ample for the sizing of the face tattoo and also offer the most visibility for the ink thanks to natural movements. Joker tattoos can also be had on nearly every surface just as long as your artist is actually up to it.

If you too want to immortalize the sinister character there is no better way to do so than with a comically charged ink of the famous face. You can choose from a range of faces with some having spectacular green hair and pale clown face. In this post we show you some 10 joker tattoos you should consider for your next ink.

Our first item on the joker tattoo list has great impact for the first time visuals and also looks pretty good to keep for like forever. It is simple sketch of the joker face just as if someone gave the description for a police investigation. There is that mischievous smile and the folds on his face and the expression that he has some evil trick up his sleeve. 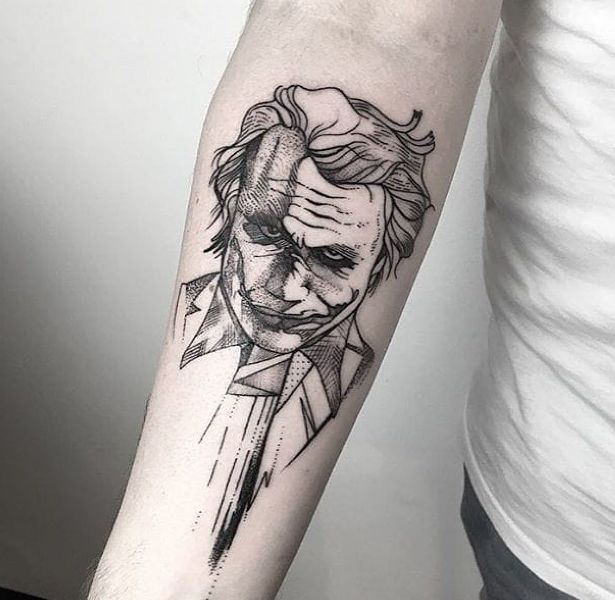 This watercolor piece features also some interesting black work with bats completing the joker tattoo. The grin is almost infectious but again you know that the joker is up to no good and so you won’t let him fool you. This tattoo has those eyes on your back effect so people remain wary of staring or talking behind your back and specifically your bare back. Bats are a further step into the creepiness and help complete the deliberately incomplete face. 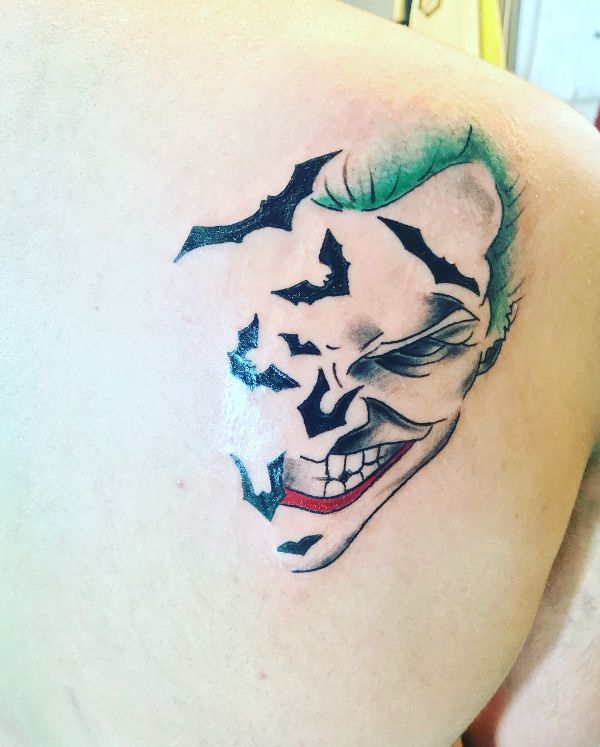 This Joker is yet another pencil sketch with neat features and a lesser grin but no eyes. This piece makes a good back tattoo for the ladies and can be suited for men as well. You know better than to let the coat and tie fool you because this sinister killer is always up to no good. This is a conversation piece that will start much conversation as long as you want it to. 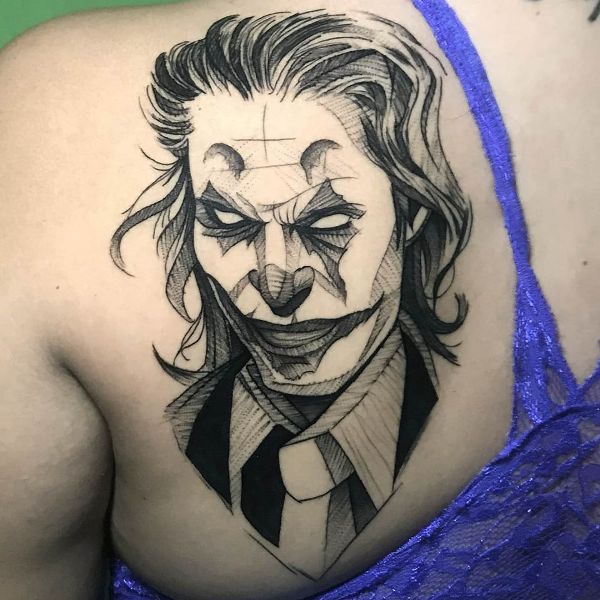 This black work is a smaller version of the joker sketch this time on woman’s forearm. This time the image is done by print with dotting online and the not so funny quote. Anyone wearing a long face will feel uneasy whenever you walk in the room flaunting this tattoo. Negative images rely on contrast between the crisp black ink and Caucasian skin. If you like this design you have to commit time and put up with the intense heat of the shading. 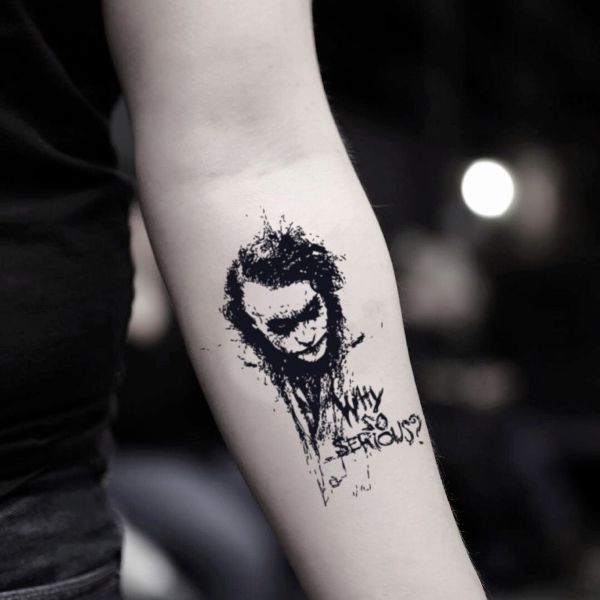 The famous joker laugh is perhaps as important to capture in a joker tattoo as is the day job with cards. This tattoo is literary on fire with cards and the joker face and some mad lettering for the laughter. If this does not break the fear factor meter then it is unlikely that you will be sacred by any other tattoos. It’s a chest tattoo and the artist makes good effects to fade off the intense ink so that the image looks natural. 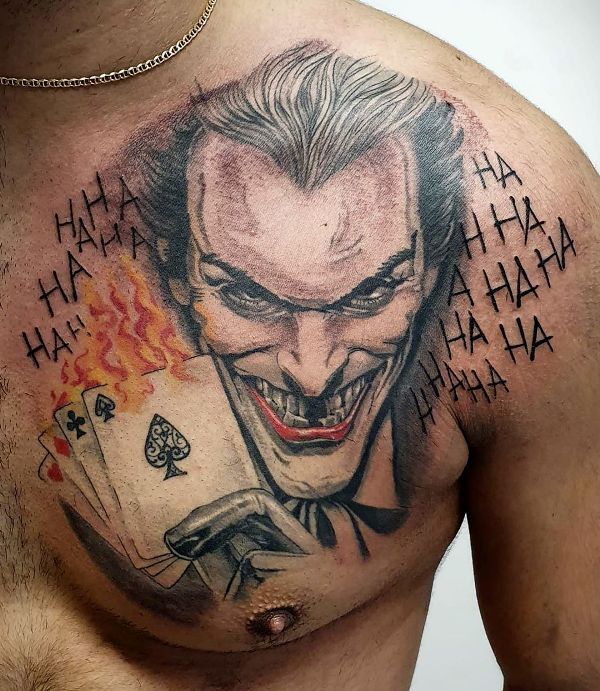 6. Detailed Joker Tattoo On The Ribs

How about getting a joker tattoo on the side? This tattoo features the joker character wearing hits clown face and looking somewhat bored. We all know that this spells trouble when the joker is bored. The detailing on this piece is quite interesting and especially the shading and articulation of the colors. This image actually looks quite realistic and will require a truly skilled artist to pull it off. 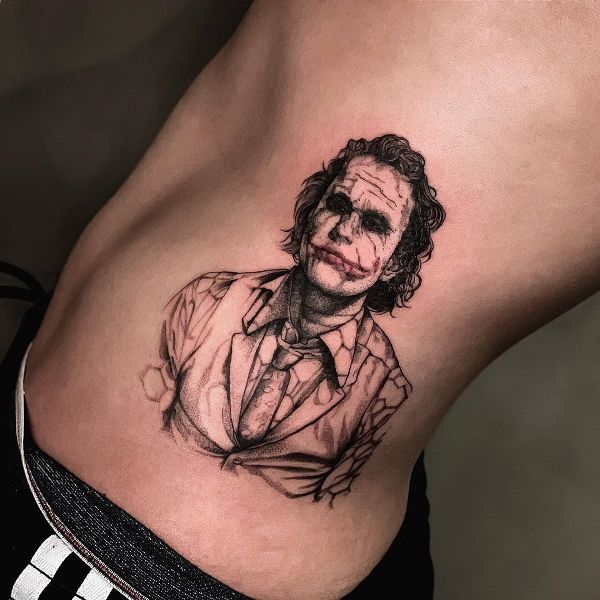 Next we have another scary joker face on the lower sleeve of a man’s arm. There is also a batman tattoo in there somewhere but we are focusing on the joker for now. That said, this is a great combination of fictional characters for a sleeve tattoo. The face of the joker is elongated and that make it even scarier. The pointy nose and weird eyebrows are pretty convincing. 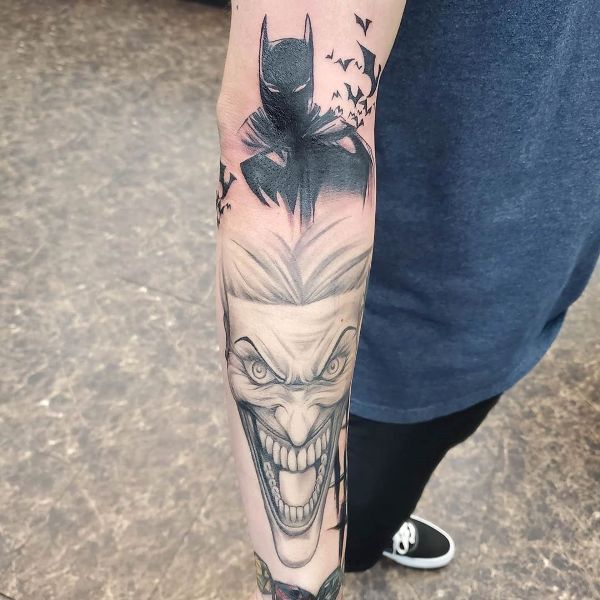 The calf is one awesome placement for a joker tattoo. You can flaunt your tattoo whenever you like and also conceal it without breaking a sweat or dress code. The clown on the other leg makes a good crime partner for your joker leg and you can tell they are both in on it. A joker tattoo with this placement is fashionable and adds to aesthetics for certain occasions. 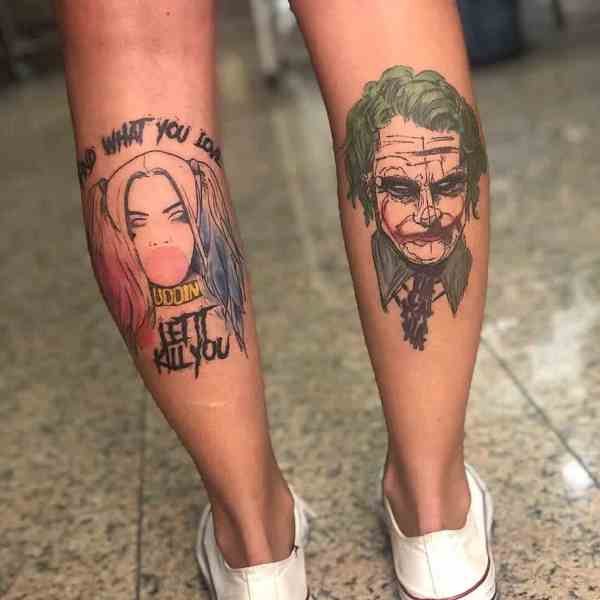 Knock knock! Who’s there? Joker! Joker who? Here is another graffiti joker tattoo with majority black work and shading and splashes of color. The eyes are excellent for this design and the dangling cigarette is also an original idea. Point a gun to his head with his right hand looks becoming for the joker character. Thigh placement is excellent for this tattoo as it makes it that much more intimate. 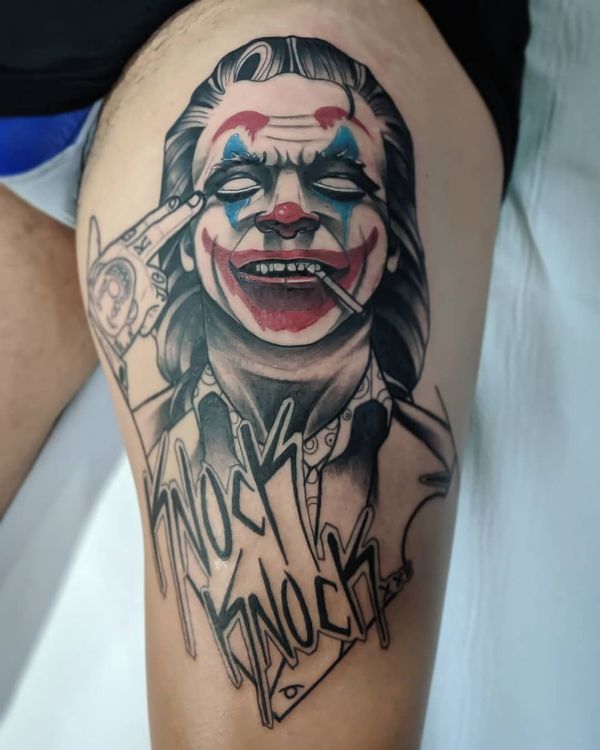 If you want a watercolor tattoo for your joker face then this joker with city background is the best inspiration for your ink. The smoke and tears are the unique twist to this tat other than the upside down city background. Watercolor designs are deliberately fuzzy and dreamy which goes well with the theme of this fictional character. 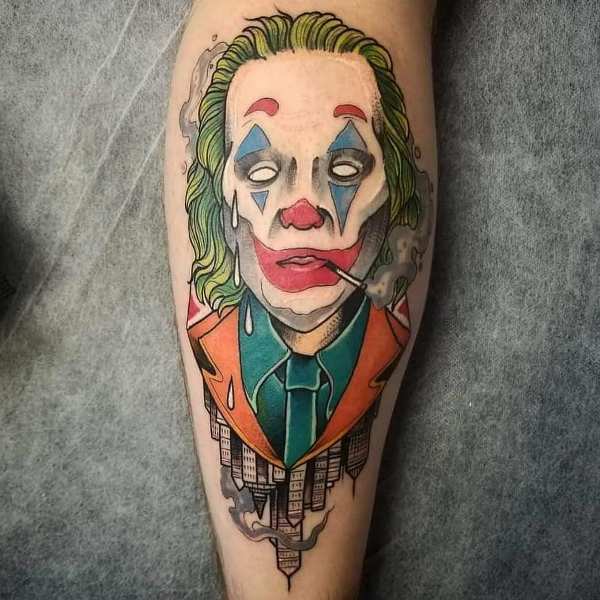 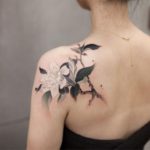 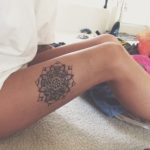 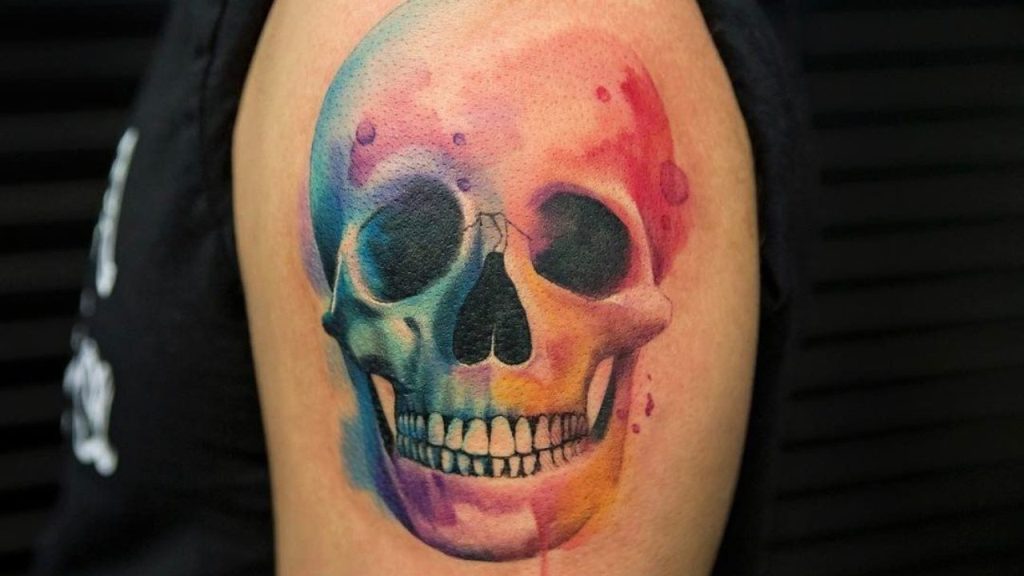 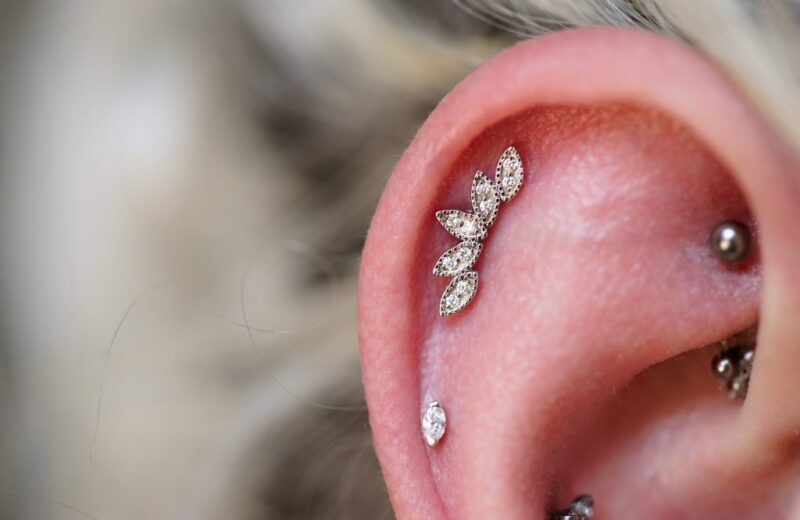 Helix Piercing: Everything You Need to Know 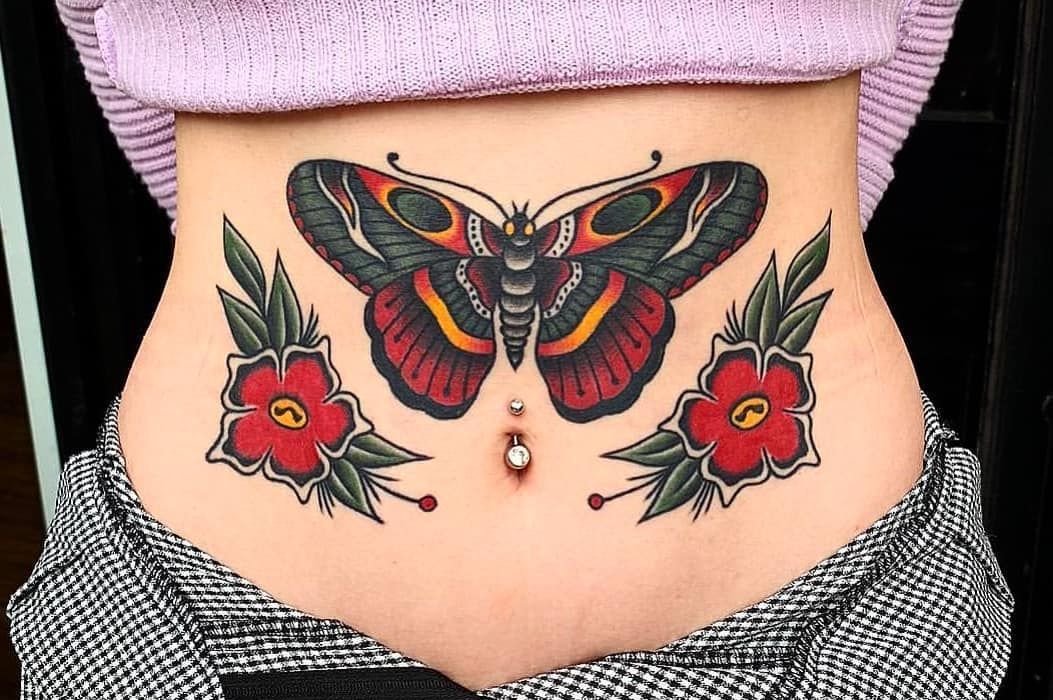